Only days before the virally marketed JJ Abrams film Cloverfield is due to open, does anyone else find it suspicious that a major news outlet like ABC news would be drumming up a UFO sighting story, based solely on a handful of "eyewitness" testimony? Seriously -- this is 2008? You mean to tell me that not a single person had a digitial camera, video or even a run of the mill cell phone on em? Precedence for this goes back at least 80 years, to the infamous War of the Worlds RKO radio show. What would it take to get such a rumor going? A few people in cahoots, and a gullible local news affiliate? What could possibly explain this making it to the national news?
Defined tags for this entry: Cloverfield, Film, West Texas UFO
Defined tags for this entry: Chuck Norris, Film and TV
Update 3/2009

Movie Gurus is back up for now. http://www.movie-gurus.com/

Movie-Gurus.com went down for the count when the hosting company wiped the site. As we'd lost around a months worth of reviews, I didn't feel like resurrecting it at the time and starting fresh. Then I started thinking about the 1500+ reviews in the database, and all the time and effort that went into the site, so I decided to see if I could resurrect it from backups. I quietly put it back up, and left a little message at the forum run by the MG originator, but that generated no interest, so I left it up and largely forgot about it. Only one little problem there --- search bots found it, and what did they want? They wanted pictures! Mostly pictures of actresses! So I suppose that MG lives again, even if for now it's only as a shadow of its former self, visited by people who are only interested in a small picture. You can find the site for now at Site taken down.
Defined tags for this entry: Film and TV, Movie reviews, Movie-Gurus.com

Recently I was driving home one evening and a local radio talk show here in Los Angeles was bemoaning the disappearance of the "situation comedy" from the lineups of the major US TV networks. Most adults remember the golden age of the TV sitcom, and classics like Taxi, Cheers, Roseanne, Cosby, Family Ties, Friends, Frasier and Seinfeld. With seminal 90's sitcoms like "That 70's show", "Friends", "Will and Grace" and "Everybody loves Raymond" calling it quits, and with the failure of critic favorite "Arrested Development", the number of sitcoms on the air and the ratings of the few that are left, are at a historic nadir.

Anyone who doesn't see the connection between an increase in internet use and the decrease in television viewership is in serious denial. A recent Jupiter Research report found that people who have an Internet connection spend as much time online as they do watching TV. This trend, when considered along with the rapid adoption of Digital video recorders like Tivo, signals the death knell of the golden age of network television -- and an end to the era when consumers would revolve their weekly schedules around their favorite "must see" shows.

Which brings me to consideration of "The funniest show (not) on TV". It's a situation comedy of sorts, although its not really a series at all. It's on a network which isn't really a network. It has no budget, no production company, no promotion, sponsors, and during its entire one year run, faced cancellation on a monthly basis, based on the direct input of those who had watched its most recent episode. Could this be the future of TV?

Continue reading "The funniest show (not) on TV" 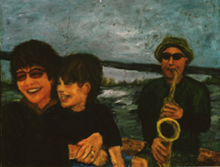 Our friend and neighbor Jane Kurson has launched a website focused on her work as a Painter. Jane has spent most of her career as a film and television editor on movies like Tim Burton's "Beetlejuice" and most recently director Patty Jenkins's "Monster", the film about Aileen Wuornos that features Charlize Theron's Oscar winning performance.

The last few years she's focused much of her time and attention on a new artistic pursuit, and its been great fun to see Janes portfolio grow, and witness the development of a distinctive style and artistic sensibility that reminds me of Impressionists like Gauguin. With two showings of her work already, Jane seems well on her way to establishing herself as a serious artist. Now if we can just get her to do a painting for our house!

You can view her Gallery at http://www.janekurson.com/


Defined tags for this entry: Art, Editor, Jane Kurson, Janekurson.com, Monster
My latest hobby is a website called Movie-Gurus.com. I've been adding to the site, rewriting quite a bit of the php code, and have contributed a few reviews. The site was started by a teenager and has grown to include 600+ films in the review database, and has a staff of around 14 total reviewers, developers and admins.
Defined tags for this entry: Film and TV